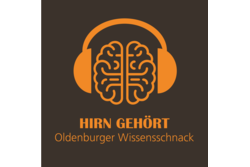 January sees the launch of the new science podcast "Hirn gehört: Oldenburger Wissensschnack", in which scientists from the region talk about their projects, their motivation, their best story, their biggest failure or their craziest favorite technical term. The podcast is hosted by Dr. Bianca Brüggen and Jens-Steffen Scherer, who also host the Oldenburg Science Slam. The whole thing is coordinated from the project "ReKuTe - Participative Science for Region, Culture and Technology" at the Jade University of Applied Sciences.

The podcast always appears on the third Thursday of a month and the prelude makes on 21 January Professor Dr. Ira Diethelm from the computer science didactics of the Carl von Ossietzky University Oldenburg. She will talk about how she was disappointed by computer science lessons as a student, but nevertheless continued to study computer science, became a teacher of mathematics, chemistry and computer science, and finally decided to pursue an academic career. The episode also talks about current issues, such as digitization in schools.

The podcast is published on the website hirnvomhahn.de, the websites of the participating institutions and via the website podcaster.de. It is a product of the project "Participatory Science for Region, Culture, Technology" of the Jade University of Applied Sciences, which is funded by the European Union through ERDF funds and "Europe for Lower Saxony".