15 years OLEC - a strong network for a strong region 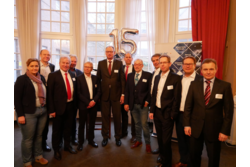 Already for the eighth time the OLEC network welcomes the new energy year with about 80 invited guests from economy, science, education, administration and politics within the New Year Networking on today's Friday. The event in the Fürstensaal of the Klinkerburg has become a fixed date for the renewable energy industry in the region. Two anniversaries are planned for 2020, because not only the Renewable Energy Sources Act has been in existence for 20 years, but also the OLEC Network will be 15 years old this year.

"OLEC has shaped the region to a high degree over the last 15 years and with its more than 60 members and numerous cooperation partners has laid the foundation for groundbreaking research projects such as enera and ENaQ and influenced the strengthening of the energy industry in the Northwest", says OLEC CEO Roland Hentschel. "Despite the current difficult situation, especially in terms of energy policy, the region still has the know-how and the players to proactively shape the energy system of the future, not least by testing new technologies and systems and developing a hydrogen economy in the Northwest. The OLEC board of directors is currently working on a vision of how the region must position itself in the coming years in order to achieve climate protection goals and to be able to answer the challenges of a future energy system with regional solutions," said Hentschel, looking ahead to the future.

Everyone agreed that a lot will have to change in the future. "When I stood here last year, I was already calling for a fresh start to the energy turnaround. Now, with the Fridays For Future movement, a player has joined in, who loudly and sustainably ensures that topics such as climate protection, environmental protection and system changes - above all in the energy economy - are right at the top of the agenda," emphasized Jürgen Krogmann, Oldenburg's Lord Mayor, who welcomed those present. However, the necessary changes cannot be achieved by changes in the behaviour of each and every one of us alone: "We also need technological developments and the massive restructuring of the energy system. Therefore, I am very much in favor of activities to develop a hydrogen economy, for example, which OLEC has strongly promoted in the past".

This year's keynote speaker, Dr. Gerd Rosenkranz of the Agora Energiewende called for a "second solar age" and emphasized in particular that the current policy of the long bank, even the shutdown management, is a massive obstacle. "Davos has shown that even the business community has now understood very clearly that it will be much harder to earn money in the future if it continues to do business as it has done up to now". He would like to see more understanding from the political leaders: "Having backed the wrong horse for years and admitting this is difficult, but it is absolutely necessary for a future worth living". Rosenkranz sees great potential in the EU's Green Deal and a rising CO2 price. "And you need people's acceptance, which is best achieved through communication. So don't stop debating the principles, educating and highlighting the importance of the energy revolution and climate protection.

For the network, the new year also begins with a strengthening of the cooperation with players from the city of Bremen: As new members OLEC welcomes the engineering office for sector-coupled renewable energy plants 1punkt5 GmbH and the University of Applied Sciences Bremen. Especially with the focus on the aspect of the relationship between the city and its surroundings in the use of resources and renewable energies, those responsible see great potential here, which is of great importance for regional cooperation across national borders.

The OLEC year 2020 will again be characterised by numerous event formats, in which the results of 20 years of renewable energy promotion by the EEG will be put to the test. However, the focus will be on future challenges with regard to climate protection, decarbonisation, digitisation and sector coupling - combined with the question of what answers and solutions the Northwest can offer. To this end, OLEC will launch, among other things, the dialogue series "OLEC dialog - Klartext" in March, in which representatives from business, science and politics will discuss the main challenges of renewable energies.

The fact that OLEC has developed into one of the most recognized and largest energy networks in Germany since its foundation is shown by the fact that it has now been awarded the silver label of the European Cluster Excellence Initiative (ECEI). The assessment process was carried out as part of the "go-cluster" programme of the Federal Ministry of Economics and in cooperation with the European Secretariat for Cluster Analysis (ESCA). OLEC also sees the successful re-certification, which is valid until January 2022, as a confirmation of the trustful cooperation of its members, board of directors as well as the continuous further development of the cluster in the northwest and sees this as a clear mandate to help shape the future development of the energy industry.