Measurement of wind turbines and Big Data for wind energy 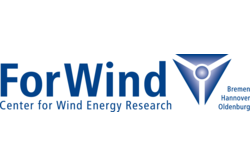 Researchers from the Center for Wind Energy Research (ForWind) are developing a new measuring system together with partners from industry, which for the first time will record and visualize the flow behavior of the rotor blades directly on wind turbines during operation. The research project PreciWind was launched at the beginning of the year and is funded by the Federal Ministry for Economic Affairs and Energy (BMWi) with three million euros over three years.

During one rotor rotation the rotor blades of a wind turbine pass through different heights with different wind speeds and degrees of turbulence of the inflowing wind. The rotor blades have to withstand enormous loads and deform under the dynamically changing flow conditions. “So far it has not been possible to measure on a rotating system how the flow around a rotor blade changes during a rotor rotation and how the blade behaves and deforms under which conditions,” says project coordinator Daniel Gleichauf from the Bremen Institute for Metrology, Automation and Quality Science (BIMAQ) at the University of Bremen. “Therefore, our goal is to develop a precise measuring system to be able to record and analyze the dynamic flow behavior of the rotor blades without contact.” The mobile laser and thermographic measuring system will be able to measure from distances of up to 300 meters. You can read more here.

The research project WiSA big data ("Wind farm virtual Site Assistant for O&M decision support - advanced methods for big data analysis") launched in the beginning of December is funded by the Federal Ministry for Economic Affairs and Energy (BMWi) with a total of 2.6 million Euros over a period of three years. Within the framework of WiSA big data, scientists and partners from industry are analyzing large amounts of high-resolution operating data of wind turbines. New and advanced analysis methods will help to detect malfunctions in the operation of wind turbines at an early stage and to optimize the maintenance of the turbines.

In modern wind turbines, large amounts of operating data are recorded with a high temporal resolution. Up to now, however, this data has only been archived in part and in the form of ten-minute mean values and has not been fully evaluated. In addition, measurement noise often overlays the data, which complicates the analysis. "In our joint project, we want to exploit this treasure of data and make it usable with new and advanced analysis methods," says project coordinator Prof. Dr. Joachim Peinke from the Center for Wind Energy Research (ForWind) at the University of Oldenburg. "The analysis of the data should help us to detect or even predict errors in the operation of wind turbines at an early stage". However, there is still a significant need for research to unlock the potential of the information contained in the data. Please read on here.