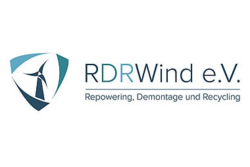 Hanover/Berlin, 17 July 2020: For the first time, uniform standards are available for the dismantling and recycling of wind turbines: On July 17, 2020, the German Institute for Standardization (Deutsches Institut für Normung e. V.) will publish DIN SPEC 4866, which is to become the industry standard in the future. On the initiative of RDRWind e. V., a consortium of 25 companies has been working on this document for one year. This included experts from the wind energy industry, recycling experts, scientists as well as employees of authorities such as the Federal Environment Agency.

The German wind energy industry will face a wave of decommissioning from 2021 onwards. Around 30,000 wind turbines are currently turning in meadows and fields all over Germany - and every second one will reach the end of its service life in the next ten years, either because it has reached the end of its service life or because it is no longer economically viable to continue operating. At the turn of the year 2020/2021, the 20-year subsidy under the Renewable Energy Sources Act (EEG) will already come to an end for around 5,200 wind turbines, with a further 8,000 wind turbines to follow by the end of 2025. Some of these wind turbines are already being replaced ahead of schedule as part of repowering, while others will continue to be operated beyond the subsidy period.

There is currently no standard or norm for the dismantling and recycling of wind turbines either in Germany or in Europe. This will change on July 17, 2020, when the German Institute for Standardization (DIN) e. V. publishes DIN SPEC 4866. "Sustainable dismantling, removal, recycling and recovery of wind turbines" is the title of the 26-page document. It sets out the framework conditions for the entire dismantling process - from planning and implementation to documentation - and offers initial assistance to operators, among other things. The new industry standard is available free of charge in German and English from Beuth Verlag and is thus also available to the European wind industry and the authorities as a template for their own activities.

For example, DIN SPEC 4866 provides recommendations on how the construction site must be secured and what qualifications are needed by the workers who carry out the deconstruction. It describes how the rotor blades, tower and nacelle should be dismantled and what safety measures are necessary to ensure that no harmful substances are released into the environment. It explains which components of the wind turbine can be recycled in which way, how dismantling must be documented and which official permits are required for dismantling in which federal state.

The recommendations will help operators and specialized companies to plan and carry out dismantling projects in the future. Both the operators of wind farms and demolition and recycling companies will thus be able to agree on a standardised procedure in future. In addition, DIN SPEC 4866 also helps local authorities and government agencies to monitor and assess decommissioning.

The document was developed by a consortium of 25 experts from the wind energy and recycling industry, scientists and employees of authorities such as the Federal Environment Agency. DIN SPEC 4866 was developed on the initiative of RDRWind e. V. - Industrial Association for Repowering, Dismantling and Recycling of Wind Turbines. It was founded in Hanover at the end of 2018, among other things with the aim of establishing industry standards as "best practice" for dismantling for the first time.

"We are primarily concerned with sustainable dismantling. Wind turbines are environmentally friendly and should remain so when they reach the end of their service life," says Martin Westbomke. "The recycling rate for wind turbines is already very high, at over 90 percent." The 1st chairman and founding member of RDRWind e. V. has worked intensively on the dismantling of wind turbines as a scientist at the Institute for Integrated Production Hannover (IPH) gGmbH. Westbomke is not concerned with a mere demolition, but with a sustainable dismantling in which as many components as possible are recycled and reused.

Andrea Aschemeyer from VSB Neue Energien Deutschland GmbH, which led the consortium that developed DIN SPEC 4866, agrees. "Until now there has been no uniform procedure for the dismantling of wind turbines," explains Aschemeyer. "But until now there has only been a manageable number of decommissioning projects, because most wind turbines in Germany are not that old. In the next few years, however, a wave of dismantling projects will be coming up - and we want to help companies, authorities and operators to be well prepared for this in order to make the dismantling and recycling of wind turbines safe and professional".

Further information on the dismantling of wind turbines can be found at www.rdrwind.de.

About RDRWind e.V.:Industrial association for repowering, dismantling and recycling of wind turbines

RDRWind e.V. was founded as an industrial association for repowering, dismantling and recycling of wind turbines on 6.12.2018 in Hannover with 10 companies. The aim of the association is to develop standards for the dismantling of wind turbines for the first time and to promote the dissemination of new professional applications and sustainable processes, standards and norms.