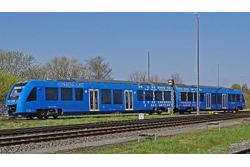 The five North German coastal states join forces to establish a green hydrogen economy as a pillar of the energy and transport turnaround: At their autumn meeting on 7 November in Lübeck, the ministers and senators responsible for the economy and transport adopted a joint "North German Hydrogen Strategy". At the same time, the heads of department called on the federal government to support their initiative and to incorporate it into the national hydrogen strategy announced by the federal government for the end of the year.

"With our strategy, we are showing a way in which the hydrogen potential can be leveraged, particularly in the area of industry and mobility. Our windy coastal countries in particular are excellently suited for this industrial policy project, with which climate protection goals can be achieved at the same time," said conference host Dr. Bernd Buchholz (FDP), Economics Minister in Schleswig-Holstein. A first important step would be the development of sufficient capacities for electrolysis. With this technical process, electricity can be converted into hydrogen. The strategy provides for at least 500 megawatts of electrolysis capacity in northern Germany by 2025 and at least five gigawatts by 2030.

According to Buchholz, the 500 megawatts alone could theoretically supply around 151,000 cars with green hydrogen using green electricity from onshore wind farms. An increase to five gigawatts would mean 1.5 million passenger cars, which corresponds to the current registration of all passenger cars in Schleswig-Holstein. In addition, a hydrogen filling station network would have to be set up in parallel with the current development of e-charging stations. For this, the department heads consider a size of about 250 filling stations in Northern Germany to be necessary.

Hamburg's independent economics and transport senator Michael Westhagemann also made it clear: "Hydrogen is a matter close to my heart, and I think the time is finally ripe for us to set off together - no longer just with general resolutions, but quite practically and hand in hand. The North German Hydrogen Strategy should express our political commitment and set the guard rails. This is what the players from industry are waiting for, because they are ready to make their contribution. Together we now want to start the process of establishing a hydrogen economy. The necessary tailwind must be provided by the federal government. This is why we will approach the Federal Government promptly with this strategy paper, clarify our determination here in Northern Germany and call on the Federal Government to quickly set the course towards the future - towards hydrogen".

Lower Saxony's Economics and Transport Minister Dr. Bernd Althusmann (CDU) also referred to the good conditions in Northern Germany for becoming the leading region of a green hydrogen economy: "Renewable hydrogen will be the globally strategic energy carrier of the future. That is why we want to build a strong hydrogen economy together. Our goal of supplying all interested customers with sufficient green hydrogen by 2035 is ambitious. It is important that the federal government now creates the right framework conditions. This is the only way for companies to remain internationally competitive despite ambitious climate protection targets and rising energy costs. In the area of transport, we are already well on our way in Lower Saxony, for example with hydrogen-powered local trains and with commercial vehicles (prototypes) for transport, street cleaning and waste collection. In steel production, we are working on using hydrogen to produce climate-neutral steel."

In detail, the ministers and senators referred to the following advantages of the North as a location for the development of a hydrogen economy:

Bremen's first Economics Senator Kristina Vogt (Die Linke) said: "Together with the other coastal states, the state of Bremen will also be working intensively on the technology for the use of surplus wind power, thus advancing an important field of competence for the energy system transformation. The use of hydrogen as an energy storage medium is an important pillar of the sector coupling and opens up promising future markets for the Bremen and Bremerhaven locations". Senator Dr. Claudia Schilling (SPD), who is responsible for Bremen's ports and science, adds: "Research and development and the promotion of innovations are essential for the success of a hydrogen-based economy. We want to turn Northern Germany into a hot spot for hydrogen research".

Mecklenburg-Western Pomerania's State Secretary for Economic Affairs Dr. Stefan Rudolph (CDU) made it clear that the energy revolution could only succeed with comprehensive sector coupling: "The establishment of a green hydrogen economy is an economic and structural opportunity for the coastal states. Because: Green hydrogen is a key energy carrier of the energy turnaround. It is crucial that onshore and offshore produced electricity from sustainable energy sources can be stored and made usable for other areas such as industry and transport. This is where there is potential for more added value and also for sustainable jobs. That is why we must work together to speed up and implement the hydrogen strategy."