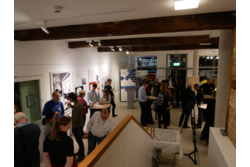 Cities and rural regions are facing increasing challenges in order to meet the constant changes of a structurally strongly changing society. What is needed are intelligent responses and new strategies, for example with regard to demographic change, climate change, changes in energy infrastructure, digitisation and working conditions.

The fact that these challenges are much discussed by business and science as well as at the local level was demonstrated by the 1st OSCAR - After Work Meetup on the topic of "Living in the city of the future" in the early evening of 4 December 2019. More and more actors are working on smart solutions to meet the diverse social challenges facing cities and regions. While a few years ago it was about 50% of the 200 largest cities in Germany that had intensively dealt with the topic of Smart City, today almost all of them do so in a variety of ways, according to Dr. Jens Libbe, Head of Infrastructure, Economics and Finance at the German Institute of Urban Affairs. Dr. Jens Libbe spoke in his short keynote speech about what makes a Smart City special - not only about innovative solutions and technologies, but also about the citizens of a municipality and how they live together intelligently. However, he also stressed that the concept of the Smart City will not radically replace existing models of a city, but will find its way into them in parts, tailored to the individual challenges of a particular city or region.

The fact that the city of Oldenburg can already boast good successes on its way to becoming a smart city is not only an impression from the research activities of Dr. Jens Libbe, but was also made clear by Dr. Sven Rosinger of OFFIS Institut für Informatik e.V. in a second keynote lecture. Dr. Sven Rosinger had already participated in the creation of the Smart City concept of the city of Oldenburg and presented in the evening the Smart City areas, which the city of Oldenburg has defined for itself, on the basis of application examples. The redesign of the air base offers the city of Oldenburg the unique opportunity to position itself as a pioneer for the development of Smart City concepts for comparable communities and cities in Germany and Europe. A part of the air base - a 3.9 ha area formerly used for military purposes - has been designated as a "living" laboratory for the testing of new Smart City technologies, among others from the domains energy and mobility, as a declared goal of the city of Oldenburg. Within the framework of the first research project located there, Energetisches Nachbarschaftsquartier Fliegerhorst Oldenburg, the laboratory offers the possibility to develop and directly evaluate services and added value for the residents in the course of the digitalisation of the energy system transformation through permanent practical implementation and operation. During the realisation of the residential quarter with around 110 residential units, which will bear the name "Helleheide", the energy forms electricity, gas and heat will be integrated into a local energy system.

After the exciting impulses, eight different thematic tables were used to discuss the different areas of a smart city. Wishes, ideas and goals were recorded and challenges were highlighted, but also concrete, already existing solutions and practical examples were introduced into the discussion. In this way, all the actors present were able to take home new knowledge as well as new ideas and impulses for their daily work.

The participants agreed that all Smart City applications should always focus on the serving function of technology, i.e. they should follow the needs of the residents. Energy, mobility and public administration were seen as key drivers in current projects throughout Germany and internationally. In the future, there was a high demand for a further exchange of experience between providers and users, as well as among users themselves. The reason is that there is a high degree of uncertainty when dealing with Smart City applications and there is so far no universal strategy for their implementation. As a recommendation to cities and municipalities it was formulated, among other things, to show courage in testing new technologies in urban space and to implement pilot projects for a test phase in practice by forming consortia of industrial partners and municipal representatives in order to gain valuable experience.

We would like to thank all participants for their participation in the 1st OSCAR event and especially for the lively exchange. Special thanks also go to Dr. Jens Libbe, who already took the time before the After-Work Meetup to answer questions with special regard to the participation of citizens in Smart City processes and to discuss current challenges in the project.

By the way, the name OSCAR stands for "Oldenburg Smart City and Region". Under this title, a regular after-work format is to be established in future for the exchange between actors from practical projects, business and science with actors from administration and the planning level of the Northwest region on intelligent solutions and innovations in the Smart City context. Therefore, we are looking forward to welcoming you at the next OSCAR event, where we will discuss one of the presented areas of a Smart City in more detail.

Further information on this and on the 1st OSCAR event can be found at: www.energiecluster.de/oscar (German only)